As software becomes pervasive in our lives, more people rely on it to perform increasingly more complex tasks. Either because of impaired user experience or real-time constraints, software performance tends to eventually become as important as software correctness. As a response to these problems, we accumulated decades worth of methodologies, tools and heuristics to detect, analyze and fix software performance problems.

Typical approaches to performance testing fall into one of the following categories.

This methodology consists in collecting performance data and comparing the current performance against historical data. This data usually comes from end-users or other type of production systems. The comparison process is often complex and involves data normalization, outlier detection algorithms and machine-learning.

For example, producers of a desktop application, like Postman, can collect telemetry about the time it takes for the application to open on a large number of devices across operating systems, architectures and system configurations. If the desktop application starts in under 1 second for 95% of users, a patch causing the desktop app to start in over 2 seconds for 90% of users is likely to be flagged as an outlier for further investigation.

A/B testing against other versions

For example, the performance of Node.js’ HTTP parser can be tested by writing a program that exercises the parser, measuring the performance of such program during a continuous integration build, and then running the same program on the same hardware using the last production version of Node.js available on the website at that point in time.

This methodology consists on maintaining a baseline and comparing current performance against such fixed baseline.

As with most things in engineering, none of the previously discussed approaches to performance testing is strictly superior than the others. Each has pros and cons, and excel in different contexts.

Testing against pre-determined baselines is only effective when running performance tests on the exact same hardware and system configuration. In the context of Apple, measuring code performance between iPhone 12 Pro devices running on the same iOS version is likely to be stable. However, setting a baseline on a specific Microsoft Surface laptop running Windows 11 and re-running the test on a specific Dell XPS running Ubuntu 20.04 will likely make little sense.

Performing outlier detection on aggregate production historical data by running code across hundreds of device configurations and operating systems might eventually give you a normalized baseline that is hardware-agnostic to a certain extent. However, this approach requires collecting enough data on the first place and having the infrastructure and analysis skills to ingest such data in a meaningful way. This approach is also prone to the boiling frog problem. It is possible to slowly introduce performance problems without triggering significant outliers. You might never be sure if a data-point is an outlier due to a legit performance problem or because it is testing a hardware configuration that was never tested before.

A/B testing against a previous version of the software on the same system is platform agnostic by definition. As a consequence, this approach is less likely to produce false positives or false negatives. However, this approach requires the availability of another software that is fully-compatible to the current version in terms of the features under test. Additionally, if the current version of the software introduces a new feature or a breaking change, testing against a previous version is impossible.

Can we do better?

At its core, performance testing is about measuring and comparing the results against a baseline obtained in some way or another. It follows that we have three variables to play with: how we measure, how we compare and how we baseline.

Software execution is in general non-deterministic due to factors such as caching, available resources and more. To improve determinism and reduce flakiness, it is an industry-standard to repeatedly run a performance test case to obtain a final take. This solves the measurement problem. Assuming such a methodology, it follows that how we baseline and how we compare is the key determinant for the level system-dependence and human-dependence that we obtain as a result.

I believe there might be a way to fulfill these requirements by relying on software tracing.

An overview of software tracing

Tracing is a technique that consists of recording events of the runtime execution of a software system to understand its behavior and performance characteristics. Tracing is an excellent tool to pin-point performance problems.

Tracing is event-based or statistical: 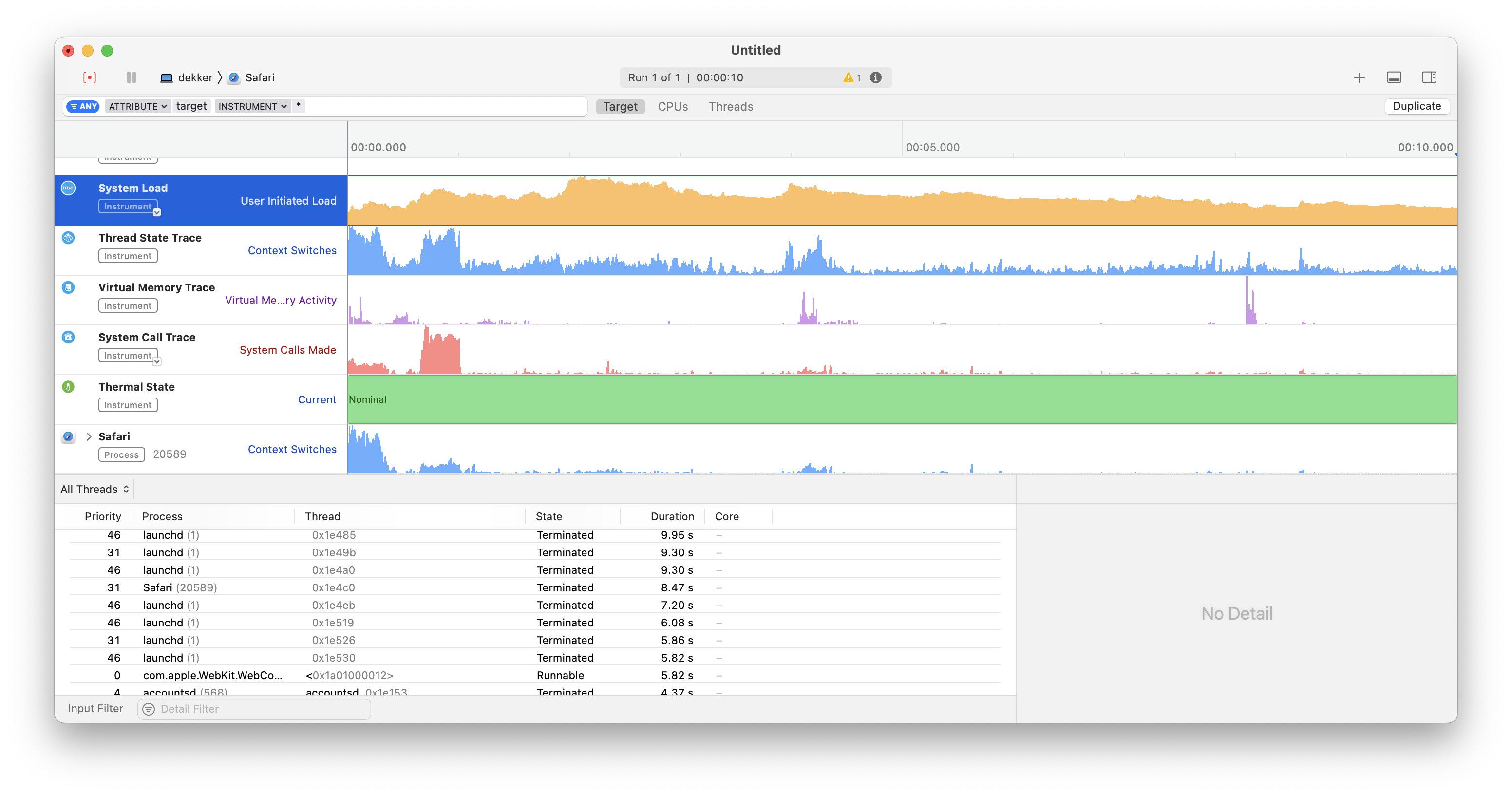 For example, we might expect the startup time of a desktop application to be under 1 second on a last-generation MacBook Pro. However, the same desktop application taking 5 seconds to start on a decade-old MacBook Air might not be bad performance at all. In these cases, we think about performance relative to the characteristics of the underlying hardware.

For example, if an application takes twice the amount of time to log a short debug message to disk than to write a large file to disk, then something its off with the former, no matter what the absolute durations of each routine was.

Therefore, I believe we can accomplish system-agnostic, deterministic, stable and automated performance assertions by establishing expected proportions between two or more traces from within the same execution instance. The proportion establishes the baseline, which is then instantiated to an absolute value based on the relationship between the measured events without requiring human-intervention. Running the performance test case multiple times to normalize the obtained proportions further reduces flakiness and increases determinism.

At Postman, we will be soon exploring this idea and sharing our results. To the best of my knowledge, no existing performance testing literature introduces a similar idea. I’m excited to see how this fares in practice and hope to share a real-world case study soon!